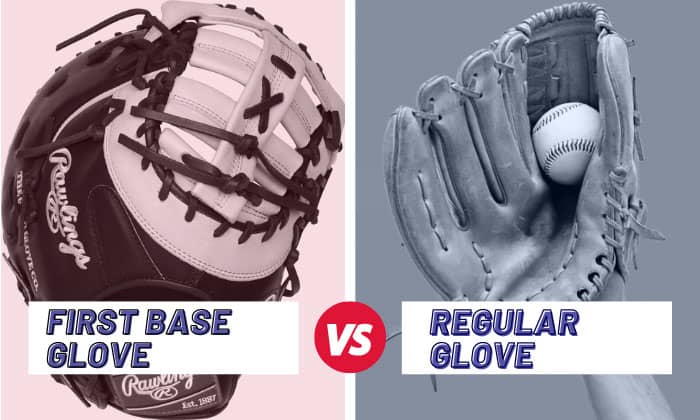 There are clear differences between gloves worn by a pitcher, catcher, infielder, or outfielder, with one worn by the first baseman. Therefore, you should be able to identify between first base glove vs regular glove to choose a piece that works for your position.

For your information, the first base glove is also referred to as a mitt, therefore you can quickly spot this glove among other regular ones due to its one-piece design.

Refer to this table for more comparison details:

Differences Between First Base Glove and Regular Gloves 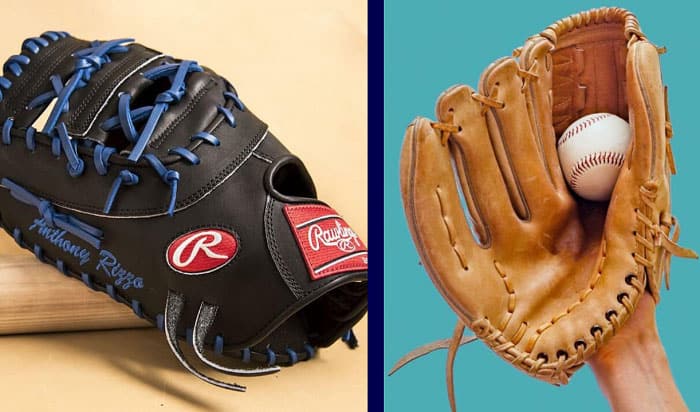 Several points make first base gloves different from other gloves in general and gloves used by other players on the field. You can rely on one or several features at once to recognize the specially-made mitt to play 1st base.

As stated above, the overall design of a first-base glove resembles a mitt, meaning it has no finger holes. In this aspect, it somehow resembles a catcher’s mitt, which also comes in a solid one-piece structure.

Other than featuring all fingers joined as one huge pad to embrace the baseball, this glove also has several unique design points:

First-base gloves also include additional features such as extra lacing, D-ring or strap. These added design elements provide players with more flexibility when adjusting the glove wrist, therefore, they can also be found in gloves for other field positions.

One distinct function of first base gloves is its use to scoop the balls thrown in the field dirt. This explains the glove’s characteristic curve, which allows picking the balls without removing the glove.

Furthermore, in order to field and catch balls, the first base glove is slightly more rigid and larger than regular gloves (save for the catcher’s mitt), providing a larger surface area. Moreover, because it is designed as a mitt, it prevents the fingers from flopping back when catching the ball.

The price depends on whether you purchase youth or professional gloves, types of materials, brands, and other additional features.

An affordable baseball glove with decent features can cost you more than $70. However, if you want to play professionally, it’s better to go for quality ones for over $150, $200, or even $500.

For your reference, the Wilson A2000 first base glove is available at around $300.

To save money, you can also purchase used first baseman gloves from quality brands such as Rawlings and Mizuno, starting at about $125, depending on the glove conditions.

Meanwhile, a first base softball glove is available at around $40 to over $300. And gloves made for other positions also have varying prices, ranging from $50 to over $400, and more for customized designs.

Because first-base gloves are typically made of leather, it is vital that you care for them in order to preserve the fabric’s condition and protective properties.

Furthermore, you should take special care to retain the glove form because it is made that way for a reason.

You must loosen the palm, heel, and pocket of a new first base mitt. Fold the glove in half, then pound along the folded edge, with a special focus on the heel, using a 5-pound mallet to loosen the stiff leather sections.

You should also play catch and throw with the glove for it to close easily. However, avoid rolling/curling the finger part while breaking in the glove.

You can purchase cleaning products for leather, including wipes, brushes, and cleaners. Compatible leather conditioners are also important to keep the glove from breaking and becoming brittle. 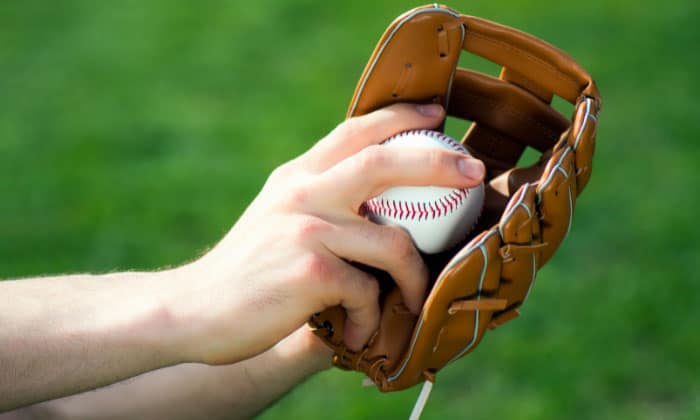 What is special about a first base glove?

As elaborated above, a first base glove comes in a solid one-piece design, making it stand out among baseball gloves with separate fingers. You can notice the piece when looking at its deep pocket, open webbing, and distinct curved edge.

Why does the first baseman have different gloves?

The first baseman often scoops balls from the dirt, so having a large mitt with a unique curve helps them do the job effortlessly.

Can an outfielder use a first baseman’s glove?

First base mitt vs catchers mitt

So, despite the fact that they are utilized in the same game, there are significant differences between a first base glove vs regular glove. The variances in gloves are determined by the various roles and their tasks in the game.

As a result, if you intend to buy a baseball glove for practice, make sure to choose the proper design. And if you’re looking for a first base glove, look for one that looks like a mitt.