Have you ever wondered, how much does a baseball weigh? Indeed, being an indispensable part of baseball games, its weight is also factored into how the game is played as well as how the players practice their catching and batting skills.

According to official regulation, the weight of a baseball ranges from 5 to 5.25 ounces. Read on to see what determines the sizes and weight of the ball and more.

How Heavy Does a Baseball Weigh?

Baseball is a sport of bat and ball. Hence, all the techniques and tactics of teams and player positions in the entire game center around these two items.

That’s why the construction of the baseball bat and ball and the forces between them are critical to the sport.

The official baseball weight, therefore, is the result of thorough calculation and modifications. Furthermore, there will be slight differences in game balls used in high school baseball, minor leagues, and MLB games.

If we compare a baseball to a softball, a softball weigh more at 6.25 to 7 ounces.

For younger players, the balls are made to be lightweight, significantly more than the standard ones used in professional leagues like MLB or the national leagues.

These soft compression balls weigh around 4.2 ounces (119 grams), as they are made of sponge rubber. We can see this type of ball in Little League or games for amateur players.

Another lighter ball for Little League baseball is the low-compression one, measuring around 4.6 ounces (130 grams).

As you throw the ball, you can feel how squishier and lighter it is, compared to major league baseball and college baseball.

Unlike lightweight rubber baseballs, leather balls weigh a bit more, as these materials are more heavy-duty.

History of the Baseball. What Baseballs Are Made of

In the course of more than two decades of baseball history, the balls and their raw materials have undergone major transformations to become the official ones we know today.

Here are some significant periods in the evolution of the ball manufacturing process and the constructions used.

Modern baseball for the MLB is produced by Rawlings using a standardized manufacturing process. However, in the early days of the sport, pitchers fashioned their own balls.

During the “Lemon Peel Ball” period, the majority of baseballs had a core composed of melted yarn and leather of old shoes or fish eyes. In addition, these balls were small, dark brown, and had four rows of stitches.

With this design, they had a greater rebound and a longer trajectory.

Fast forward fifty years to the 1850s, standardizing baseballs became an essential goal for teams in New York. The conventional baseball at the time had a circumference of 8 to 11 inches and a weight of 5.5 to 6 ounces.

However, there were still many types of baseballs that offered distinct feels and speed due to differences in the hand-made process and materials. There were two popular types at that time:

Figure-8 baseballs are also known as modern-style baseballs because the stitches are lined up to form the number 8.

In 1910, the cork-core ball era began. The cork-core ball was tougher, so a baseball player could hit it harder. This resulted in higher batting averages and the live ball area starting, effectively ending the dead ball period with low hits and scores.

Then, Australian wool was utilized to create baseballs in 1920, combined with machine winders for a tighter wrap. However, this Australian yarn ball made little difference in the game.

In 1925, a baseball featuring a cushioned cork core and both black rubber and red rubber coverings was produced.

Close to a decade later, the American League and National League finally reached an agreement on the baseball’s structure in 1934. At this point in time, the ball’s anatomy was as follows:

Due to the fact that cork and rubber were not common materials during World War II, balata, a rubber-like material, was utilized for baseball in 1943.

After the introduction of synthetic rubber in 1944, the usage of rubber cores was reinstated. 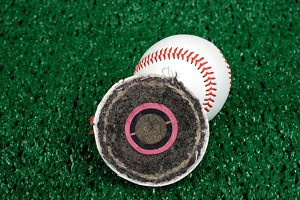 While the baseball’s basic design has remained the same, cowhide has been introduced as an alternative to horsehide in 1974. Since that year, there hasn’t been a major change in the design of new balls. 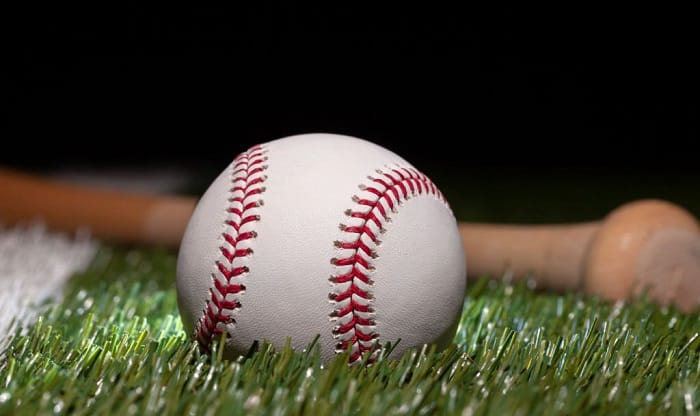 As you already know, a MLB baseball weigh 5 ounces to 5.25 ounces, and is produced by Rawlings.

The baseball design includes a core, covering layers made of leather and wool, along with hand-stitched red threads. Let’s break down the mass of a baseball:

What is the average life of a baseball?

The lifespan of a game ball is only seven pitches, and occasionally even six pitches. The ball is discarded and a new one used whenever it makes contact with the ground or a bat.

A typical MLB game will employ between 84 and 120 baseballs.

How many stitches does a Baseball have?

The outer layer of the baseball made of red threads are called stitches. A baseball has 216 single stitches (108 double stitches).

How many ounces in a pound and in a kg?

So, for measuring the baseball weight, 5 ounces to pounds will be 0.3125, which is the exact weight of the baseball. And 5 ounces to kg will generate a result of approximately 0.142.

Now, you know that a Major League Baseball weighs around 5 to 5.25 ounces and that MLB baseballs differ from soft baseballs used in little league and high school baseball.

Furthermore, the new ball today has experienced multiple changes, from the live ball era and the early dead ball era, to the introduction of the revolving machine and mass production. There are indeed many fun facts derived from a simple question, “how much does a baseball weigh? “